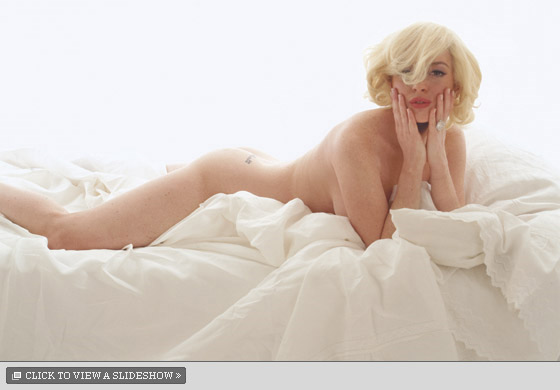 The photos endure partly as artifacts—as the last visible evidence of the living woman (a legacy reinforced by Stern’s decision to publish the contact sheets Monroe herself had crossed out in red marker). But the pictures are also remarkable for the raw truths they seem to reveal. In them, we see an actress whose comedic talents were overshadowed by her sex appeal, a woman who is cannily aware of her pinup status, yet is also beginning to show her 36 years. In many shots, she is obviously drunk. This was an unhappy time for Monroe. Notorious for her on-set antics, she had been publicly lambasted by Billy Wilder after Some Like It Hot, then fired from the production of Something’s Got to Give; she’d endured two recent divorces and, in 1961, a brief stint in a psychiatric ward.

Stern excavated and preserved the poignant humanity of the real woman—beautiful, but also fragile, needy, flawed—from the monumental sex symbol. In our armored, airbrushed age, his achievement feels almost revolutionary.

Forty-six years later, Stern has revisited his classic shots with Lindsay Lohan, another actress whose prodigious fame is not quite commensurate with her professional achievements. Stern, who shot the photos on film rather than digitally, told me he was interested in Lohan because he suspected “she had a lot more depth to her” than one might assume from “those teenage movies.” Indeed, many in the film industry believe that Lohan has yet to pursue projects equal to her gifts. Without putting too fine a point on it, you might say Lohan has, like Monroe, a knack for courting the tabloids and tripping up her career. (Readers will remember that Lohan had her own Billy Wilder moment two summers ago on the set of Georgia Rule.) Stern said the project also grew out of his interest in “controversial women,” or “bad girls,” like “Britney, Paris, and Lindsay.” Monroe was, in a sense, the original tabloid queen.

Though Lohan’s willingness to reprise the photos might seem a sly nod to her scandalous past, the actress offered a straightforward explanation. “I didn’t have to put much thought into it. I mean, Bert Stern? Doing a Marilyn shoot? When is that ever going to come up? It’s really an honor.” During a break in the daylong shoot, Lohan sat cross-legged on a bed in the four-room suite and spoke to me, in that familiar throaty voice with its staccato rhythms, about her abiding obsession with Monroe. Her interest took root a decade ago with multiple viewings of Niagara during the London filming of The Parent Trap. She has even purchased an apartment where Marilyn once lived. “If you saw my house … I have a lot of Marilyn stuff,” she told me, including a huge painting of Monroe.

“It’s eerie,” Lohan said of the painting, a Christmas gift, “because it’s this picture of her, and it’s kind of cartoony, and there’s a big bottle of pills next to her, and they’ve fallen over.” Lohan called Monroe’s suicide “tragic,” and then added, elliptically, “You know, it’s also tragic what just recently happened to someone else.” I asked whether she was referring to Heath Ledger. She nodded: “They are both prime examples of what this industry can do to someone.” Why some and not others, I asked, since it has often seemed that the thrice-rehabbed Lohan might meet a similar fate. Lohan replied with a flicker of annoyance: “I don’t know. I’m not them. But I sure as hell wouldn’t let it happen to me.” Still, one wonders whether Lohan’s participation in this project, given all the spooky parallels, isn’t the photographic equivalent of moving into a haunted house. (Which, in fact, she may have already done.)

Lohan viewed the shoot as a theatrical performance, as a chance to inhabit the role of an idol. “I wanted to portray the book and get it point-on as much as I could, to bring it back to life,” she said. Hence the strict mimesis: scarves, nudity, and all. “Not more than fifteen minutes had passed since she’d arrived, and already she had agreed to take her clothes off!” Stern writes of Monroe in his swaggering introduction to The Complete Last Sitting, the book in which all 2,571 photos have been collected. He might have said the same about Lohan. “I was comfortable with it,” the actress remarked of the nudity (though she did confess to doing “250 crunches” the previous night). All made up, in winged eyeliner and shellacked blonde wig, Lohan, who has returned to her former voluptuousness, at times appeared more Marilyn than the thin, somewhat diminished woman of the original Marilyn photos. “It was very similar, déjà vu you might say, like revisiting an old street,” said Stern.

The original photos, however, were distinguished by an almost claustrophobic intimacy between photographer and muse. In the first session, Stern persuaded the entourage of stylists to leave him alone with Monroe. The shoot thus took on the symbolic (if not the actual) contours of a liaison. The rise of the celebrity industrial complex has rendered this sort of tense pas de deux all but impossible. At the Lohan shoot, the crowd included Lohan’s manager, her security guard, and her younger sister, Ali; a makeup artist and assistant, a hairstylist and assistant, a stylist, a manicurist, a sentry to watch the borrowed diamonds; Stern, his manager, and two photo assistants. Lohan and Stern worked in an adjoining room, while the rest of us hovered outside like groupies at a backstage entrance.

“Here is a woman who is giving herself to the public,” Lohan said, about the Monroe photos, when we spoke the next day by phone. “She’s saying, ‘Look, you’ve taken a lot from me, so why don’t I give it to you myself.’ She’s taking control back.” Like any tabloid veteran, Lohan understands the potency of a photograph, and that the best way to respond to a society that views you only as an image might just be on its own terms.

SEE ALSO
• Behind the Scenes at the Photo Shoot

spring fashion 6 mins ago
Everyone’s Dissolving Their Pillowy Filler Faces The filler era has ended. Now, everyone’s scooping out their face.
By Sangeeta Singh-Kurtz
it's vintage 6:51 p.m.
How Well Do You Remember Y2K Trends? Put your millennial bona fides to the test.
prison 6:30 p.m.
Jafar Panahi Goes on Hunger Strike to Protest Detention at Evin Prison Panahi should have been released to await a retrial on charges stemming from 2009’s Green Revolution.
and just like that 6:15 p.m.
What on Earth Is Happening on the Set of And Just Like That …? Aidan’s back … and smoking?
early and often 6:14 p.m.
Trump Reminds Republicans He’s Willing to Ditch the GOP Even if he doesn’t formally launch a third-party bid, Trump could doom the 2024 Republican presidential nominee.
best in class 5:50 p.m.
The 16 Very Best Jewelry Organizers Put your pearls in their place.
best in class 5:05 p.m.
The 8 Very Best Men’s Tennis Shoes You’ll be Grand Slam ready with these expert-recommended picks.
celebrity shopping 5:00 p.m.
What Erin Andrews Can’t Live Without “I’m a pretty neutral kind of gal. Somebody says ‘red lip’ and I start to panic.”
gender inclusivity 4:25 p.m.
& Juliet Actor Opts Out of Gendered Tony Award Categories “I felt that I had no choice but to abstain from being considered for a nomination this season,” Justin David Sullivan wrote.
best in class 4:10 p.m.
The Very Best Memory-Foam Pillows Memory-foam pillows that cradle your head as if they were made just for you.
mysteries 3:54 p.m.
Who Dyed This Pigeon Pink? The bird may have been part of a gender-reveal party.
overnights 3:24 p.m.
The Real Housewives of Miami Recap: A Tale of the Gringos If Alexia is going to pretend to be offended to get an apology out of Nicole, then at least accept the damn apology.
gifts they might actually want 3:10 p.m.
The Best Gifts for Teenage Girls, According to Teenagers Including cozy blankets, cargo pants, bedroom décor, and lots of beauty.
By Chloe Anello and Arielle Avila
gone sale-ing 2:56 p.m.
10 Things You Don’t Have to Pay Full Price for This Week Some pre–Valentine’s Day shopping.
buffering 2:48 p.m.
Could Peacock Maybe, Finally, Be Having a Moment? The shows are clicking, but will it be enough for the struggling streamer? Content chief Susan Rovner is betting on it.
royals 2:43 p.m.
Australia Banishes King Charles From Its Banknotes In the battle to succeed his mother on Australian $5 bills, Charles loses to the First Australians.
valentines day 2022 2:30 p.m.
The Best Valentine’s Day Gifts Under $25 for Every Type of Valentine Including an elegant honey dipper, Danish licorice, and the “fine wine” of notebooks.
crime 2:25 p.m.
A German Woman Has Been Charged for Murdering Her Doppelgänger Authorities believe the crime was part of an elaborate plot to fake her own death.
power 2:03 p.m.
Eagles Player Indicted on Rape Charges Ahead of the Super Bowl, rookie lineman Josh Sills faces felony charges for rape and kidnapping in Ohio.
renewals 1:55 p.m.
The Traitors Triples Down on Mess With a Second Season and Andy Cohen Reunion Looks like Peacock has a reality-TV hit on its hands.